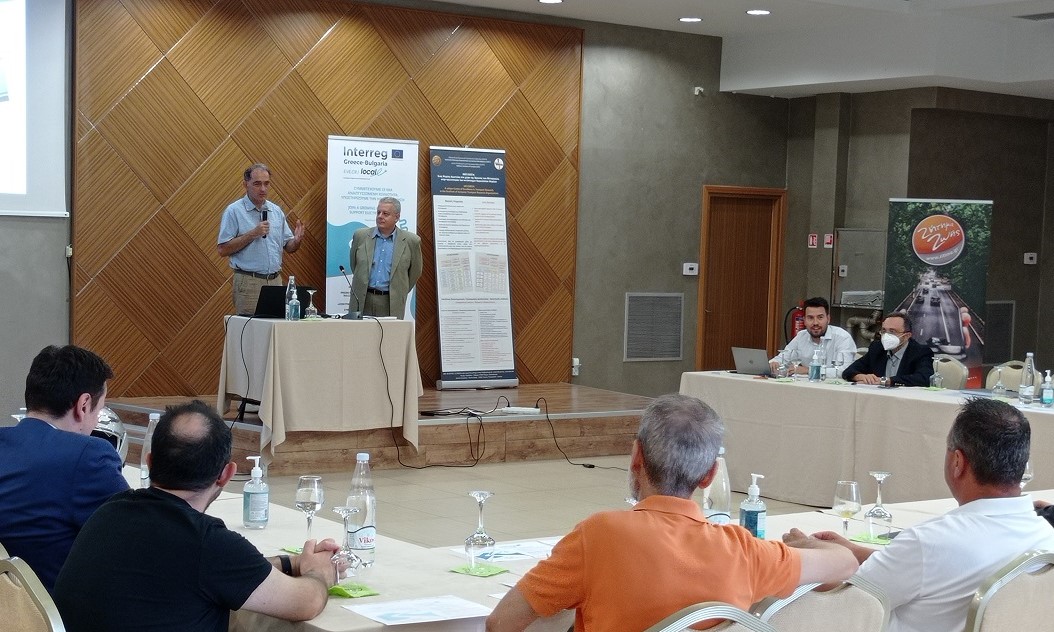 On Thursday, June 23, 2022, we held a round table on electromobility and the installation of EV chargers  with great success in the city of Xanthi. The event was attended by more than 20 people! The workshop took place at the Elisso Hotel and attracted several stakeholders from the fields of local authorities and business who were informed about the ways and good practices for building a sustainable future for local businesses and the community through Electromobility. The round table was organized by the Hellenic Institute of Transport (HIT) of the Centre for Research and Technology Hellas (CERTH) in collaboration with the Institute of Sustainability and Safety (Life Issue). The member of Greek parliament for Evros, Mr. Stavros Kelesis, the Deputy Regional Governor of Xanthi, Mr. Konstantinos Kourtidis, the Mayor of Xanthi, Mr. Emmanuel Tsepelis, and representatives of the Chamber of Xanthi were present. The round table was successfully coordinated by Mr. Athanasios Karlis, Associate Professor at the Department of Electrical Engineering of the Democritus University of Thrace.

In his introductory speech, the Director of the HIT/CERTH, Mr. Evangelos Bekiaris, presented the actions and diversity of the work of HIT/CERTH emphasizing that it aims to be the main and coherent pole of research in Transport, Sustainable Mobility and Tourism in Greece and within the ten best relevant technology and know-how hubs in Europe.  Greek Electric Vehicles Association (HELIEV) stressed that the widespread ise of electric cars in the large urban centers of the country does not require significant changes in the energy system nor in the distribution networks, as some claim and that a program for the withdrawal of old and polluting cars and their replacement with hybrid and electric cars is imperative. He also referred to the prioritization of actions for the promotion of electromobility in Greece, which includes, among other things, the development of a database of charger network, the promotion of the development of electric vehicle fleets by public bodies, the promotion of electric micromobility and the development of appropriate business models for the promotion of electromobility.

Mr. Athanasios Tsioutras, Civil Engineer – Transportation Engineer – MSc Environmentalist from the Department of Public Actions HIT / CERTH analyzed the market of electromobility in Greece. Mr Tsioutras first referred to the situation at European level. Regarding electromobility in Greece, he stressed that it is growing more slowly compared to other European countries but despite the COVID19 pandemic, the market for electric vehicles showed a remarkable increase. In addition, he talked about the development of economic incentives in order to expand the sector and the charging infrastructure in Greece that follow the trend of sales of electric vehicles. Finally, he presented the main players and operators of charging stations in Greece.

Athanasios Tamvakos, Mechanical Engineer in turn, member of HIT/CERTH, presented the legal framework for electromobility in Greece. Regarding the installation of charging devices, it was mentioned that they should not hinder the smooth traffic flow of wheeled vehicles and the safe pedestrian’s mobility and should not disturb the smooth and functional layout of the activities within the area where they are located. He also presented the technical specifications of charging devices for electric vehicles and the licensing – approval procedure for the installation of battery charging devices for electric vehicles. At the end of his presentation, he referred to the incentives given by the Greek state for the installation of electric vehicle chargers to both natural persons and companies.

The round table was followed by very interesting presentations by the representatives of companies that have entered dynamically in the field of electromobility and the strengthening of the network of chargers and batteries of electric vehicles. On behalf of EVNOW, Mr. Konstantinos Mathioudakis – Sales Manager presented the company’s service package that includes a wide range of chargers that can meet the charging needs, platforms that enable remote management of chargers and a nationwide network of technicians that undertake from the study of the site to the installation of the chargers, presented a wide variety of chargers offered by the company EVNOW and how they work. Subsequently, Mr. Antonios Mazonakis, CEO of GERANOLIMENIKI S.A. initially presented the electrically powered cleaning, recycling, collection, shredding and technical support equipment such as scrapers, sweepers and vans available to his company. Then, he made the presentation of the company MC-CHARGERS, which he represents and which sells electric vehicle charging stations, both for public and private use.

Mr. Nikolaos Kalikatzarakis – Head of the Power Networks Division of ABB also presented the large scale of charging solutions provided for the company’s customers for a variety of uses for both public and private use with a great appeal to fast charging. Finally, Anastasios Matikas, Director of Electromobility Business Development of ELPE Future, referred to the development of an extensive network of charging stations for electric vehicles and is active as a Charging Infrastructure Operator and as a Transaction Processing Body.

The cycle of presentations ended with a brief assessment of the actions of the EVECRI project regarding the Bulgarian side by Mr. Martin Zaimov, from the BAEPS, the Bulgarian Association for Electric Vehicles, who stressed the need for interoperability between the actors on both sides of the border.

This was followed by a very productive discussion among the participants, who voiced their concerns on the issues of financing the projects for charging stations but also on the need for additional and braver subsidies for the purchase of an electric vehicle. In addition, some very substantial questions were put to the representatives of the companies regarding technical and other details about the use and performance of the chargers.  The conference ended with a summary of the work done by Mr. Bekiaris who pointed out the new developments that are imminent and pertain to the sharing of car use, as well as new business models that will help promote greater use of electromobility.